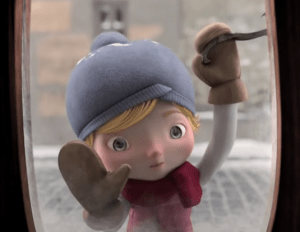 Alma happily skipped down the street and decided to write her name on the wall with all the other people. As she finished writing her name, when she approached the other side of the street, she saw a doll in the window and a bunch of child missing posters next to it. But what she didn’t notice was the building…

The shop window was huge and striking.

As Alma turned around, she was struck by the self-like doll that had appeared in the middle of the glass pane. Slowly, she approached the shop door and she slammed down the door handle, trying to open the door, but it was locked. Furiously, she threw a snowball at the middle of the door and started to walk off. Just then, the door creaked open. Alma’s face lit up with excitement as she burst into the shop. As she walked in, the expression on her face changed from happiness to bewilderment.

All around the shop walls were creepy and busted up dolls. They were everywhere, covering up the whole height of the walls all around the shop. As she looked around the room, Alma saw her doll on a dark, gloomy red table. She walked over to the table. As she did, her foot tapped something on the ground. She looked down. It was a doll on a tricycle, tipped over sideways at her feet. She picked it up and set it straight. She didn’t think much of it, but it took off across the room, pedalling quickly and headed straight for the door. Alma shrugged and looked up to see that her doll wasn’t there anymore. She had another look around the room and spotted it on a shelf.

Alma climbed up on a couch that was directly underneath the shelf, with the idea of reaching up for the doll. As she climbed up, she didn’t notice, but there were two identical dolls that looked at her climbing up the couch towards the shelf. As she reached her hand up really high, Alma was on her tippy-toes trying to grab the doll. The doll’s eyes looked hypnotising and sucked her in. As her brain flashed back, Alma saw a bunch of dolls and herself. When she woke up, Alma was not Alma.

She was a doll.

A new doll popped up. Its orange hair was styled with a little bow and it stayed in the window for two days and nothing happened.

BOOM! BANG! Suddenly, Alma – who once was a little girl – and was now a doll, decided to lunge at the new doll to try and take it off the stand so that no one would get sucked into it. But as soon as Alma went to jump, it was too late: another little girl was staring at the doll from outside the shop. That little girl, like Alma, tried to get into the shop by wiggling the door handle. But this time she wasn’t alone: a figure made out of shadows put more dolls on the stand next to the orange-haired doll. Five seconds after, a bunch of little girls sprinted, trying to catch up to the new little girl pulling on the handle. They all decided to tug on the handle together. They opened the door. They all went to touch the dolls.

WOOSH! The dolls disappeared into new spots in the room. As all the girls decided to jump up and touch their dolls, all at the same time, they all got sucked into their own doll’s bodies. As they looked around afterwards, they noticed that more dolls had opened their eyes, thinking that more people had been sucked in again.

That night, all the shelves floated down to an underground cellar and were placed into a machine that brought all of their spirits back into their normal body. The children’s bodies walked outside onto the street and had to find themselves a way home as the owner of the shop, made out of shadows, slammed the door and said, “That should teach you, kids, not to go into a locked shop!”